Whenever I get a new idea for something, I just assume that it appeared in my head because someone else has already done it. The fear of copying keeps me from doing many things. However, I know that almost nothing we do is truly original. Should I just blaze on ahead, regardless of what may already exist in the universe?

Anyway… my latest idea came Thursday while I was trying to squeeze in some dyeing. Since the Pittsburgh Knit & Crochet Festival was more successful than I had anticipated, I am now scrambling to get more inventory ready before A Knitter’s Fantasy. Rather than dyeing for three days, I just did as much as I could in one. Along with my usual crock pots and stock pots, I also had two roasting pans in service. Usually I lay out 8 ounces and dye it all the same. Then I have two 4-ounce braids that match. This time, instead of laying them side by side, I laid one on top of the other. When they came out they weren’t the same, but they did go together nicely. And that’s when I thought, “aha! Companion colors!” You would get 8 ounces total, but you could spin them as separate yarns, ply them together, alternate, etc. One is semi-solid and the other has more variety.

I’m sure no one actually wants this, but I’ve got a few to try out and then I’ll probably keep doing it anyway (because I just do whatever I want most of the time). Even if the customers don’t care for it, I may enjoy using them myself. Or I could split them up and sell them separately. Basically it’s very low risk to try something new-ish. Why not, right? 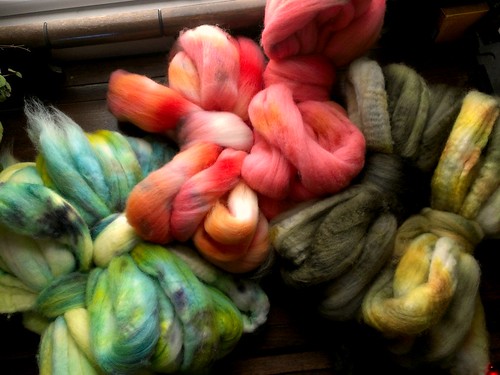