Every January our local SCA group hosts an evening of eating and dancing. To help pay for the site, we hold an auction. Usually the tables are piled with cast-off garb, feast gear, books, nicknacks, etc. We don’t generate a huge amount of money for those things. But one year there were several handmade items on the table, which helped to increase the money we made. For this year I suggested we do an artisans auction — all items donated must be made by hand and relevant to our group. My contribution is handspun yarn (surprise!). I have three skeins of Shetland. One is the natural fawn color and the other two constitute my first attempt at natural dyeing in many years.

I started with three pots on the stove. One had alum, one had copper, and one had madder root. While the madder was simmering, I mordanted the yarn along with some fiber. I put one skein of yarn and a braid of roving in with the madder. In the alum pot, I dumped some turmeric and brazilwood. Since there was extra space in the pot I tossed in an old dish towel. After removing the yarn, I dyed a piece of linen fabric. The copper pot got logwood extract and then later I threw in some tin. Nothing exploded and I didn’t pass out, so I think it was okay.

The yarn dyed the best, but what a mess! I rinsed the skeins so many times and still it seemed like the water wouldn’t run clear. And despite straining, I ended up with all these fine pieces of plant matter in the yarn. When I reskeined them, I ended up with a dust pile underneath the swift. But overall they turned out better than I had expected. And you cannot deny the power of natural light in photos! 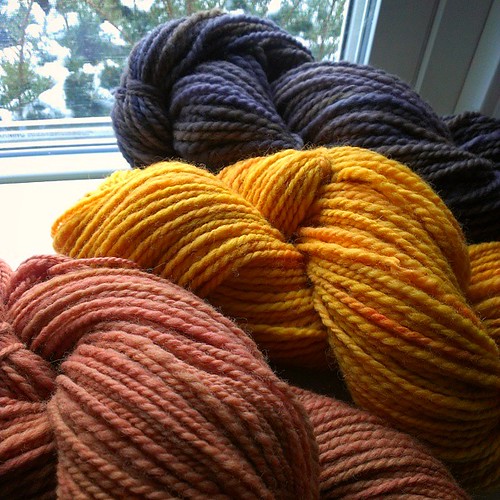