One of my goals for this year is to refine my inventory. I want to focus on items that are directly related to creating unique projects with fiber. That includes the material itself in different forms (combed top, roving, batts, locks, yarn, etc.) and tools necessary to help the process along.

Eucalan, spindles, knitting notions, felting needles. These are all items that enhance the experience of working with natural fibers. This spring I am very excited to add a new product to the line up: Greener Shades Heavy Metal-Free Acid Dyes from Still River Mill. I have been using these dyes myself for about five years, and while I am not an expert, I am happy to share them with you now! 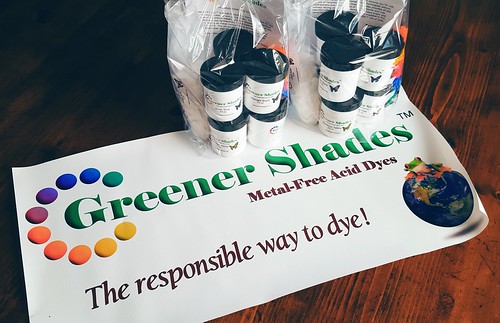 I often realize that there are many different facets to my business, Gwen Erin Natural Fibers. While it may have started as a knitting-focused endeavor, things have definitely changed. When I am at craft show, where most customers expect to buy finished goods, I usually get a few people who ask about my mitts as if I am there solely for the purpose of giving them ideas for their next personal knitting project. They flip the mitt over and over again, trying to figure out exactly how I created it. “Oh, I can do that,” they inform me. “I never said you couldn’t,” I think. Even though these interactions bother me, I’ve come to the conclusion that knitwear is not my primary focus. Rather, I am in the business of selling fiber and yarn. If I can encourage a customer to purchase yarn because they see what I’ve made with it, then I’ve still made a sale. I have now come to see my finished goods as samples-for-sale. Of course, if I were actually able to record the patterns for the things I make, all the better!

There are two main types of events I participate in, and they have slightly different inventory. This can be confusing sometimes. Why didn’t I bring my spindles to the Holiday Art Show? Because I didn’t make them. Below I have outlined the major characteristics for these two types of events. 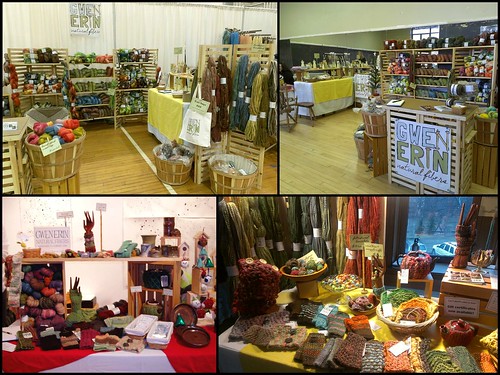 In addition to “live” sales, I have had an online shop since 2008. Recently I shifted from using Etsy to using Storenvy. One of the main reasons I made this decision was financial. Also, I wanted to step away from the restriction of only selling handmade items (not that it really matters on Etsy anymore). My goal was to create a separate branch of the business, a way to differentiate the online aspect and keep it open during festival season. This led me to create a destashing shop. The fiber inventory listed there will only be available online.

Having all these different aspects to my business can get confusing, but it also makes me very versatile. I can shift from one type of event to another, recreating myself as I go. My display changes with the inventory, but the theme stays the same: natural fibers! Although it took several months to get everything in order, I am so excited about the newest item in my collection of goodies. I guess you could even say it dates back to the very first day I learned to spin.

So before I reveal the new product, here is a bit of the story. It all begins in August of 2005. I was at Pennsic War and I was looking for something to do, so I decided to take a class on using a Turkish drop spindle. I had no idea what I was getting myself into. Things were going well. I wasn’t feeling frustrated or defeated. When the class ended, the instructor told us we could buy the spindle for $20 if we wanted to. I looked into my pouch and all the money I had was $20. I knew if I didn’t buy it then, I would shop around and likely not buy anything, so I took out my only bill and handed it over. How could I know that was the beginning of something amazing?

Shetland fiber with spindle from January 2007. Let’s fast forward to spring of 2012. I had gotten the message that my favorite spindle was pretty popular. Every time I would demo it at a show, passers-by would ask where I got it. If only I had them for sale! So, I decided to write to the man who made my spindle, even though I’d heard he didn’t do wholesale. I told him the story of how I learned to spin from him, thinking that might help. But months went by and fall arrived. Rich and I decided to buy a lathe with the idea that we would make spindles ourselves. I tested it out, but I could tell it was going to be a long road. And then I got an email. It said YES. Yes, you can sell my spindles! I told Rich right away and he said I should order some, but I fiddle-faddled around. Knowing I’d be getting into busy season soon, I didn’t want to wait any longer. Just before Christmas I sent in my order.

That brings us to now. Yesterday I received a box containing some beautiful handcrafted tools from Valkyrie Supply. I picked out two different styles of wool combs and 10 assorted spindles. The spindles come in three different colors/woods: black walnut, cherry, and maple. Now when I stand outside my booth spinning on my favorite and first spindle, I can be more confident then ever. If someone asks where I got it or if I have them for sale, I can exclaim, “Yes! Right here. Which color do you like? Would you like to try it out?” This is a story seven years in the making. I began on one of these spindles. And now I have the pleasure of offering them to you so you can make your own story.

I just spent the last two days measuring, naming, labeling, and cataloging 53 individual items (yarn, locks, and roving). And now I feel that I need to share my inventory spreadsheets, just so you can see how awesome they are. Because they are awesome.

Since 2010 I have been tracking my inventory on three different spreadsheets: one for spinning fiber, one for yarn, and one for knits. I record all the various details about the item so I can review when an item was sold, how much it cost, and where I sold it. Let’s take a closer look at the fiber sheet.

I suppose there are easier or quicker ways to track these things, but I’ve enjoyed creating these sheets and maintaining them. After not tracking anything for a few years, I actually feel better now having these spreadsheets set up. Recently I added a few additional sheets. I moved all the items sold in 2010-2011 to its own sheet. I also created a sheet for fiber that was taken out of rotation and spun by me. That way I still have a record of the item, but it no longer shows up in my active list. This is essentially the final step after I’ve braided or bagged the fiber, weighed it, named it, and labeled it. Then it goes in a box and waits for me to send it home with someone else.